Lion tribal tattoos like this one symbolize power and strength. This guy’s large black arm and chest tribal tat is sexy.

Tribal tattoos are one of the most popular types of tattoos for men, mostly because there are so many options when it comes to tribal tattoo art. This guy’s tribal arm tattoo is large, extending from his left elbow, up his shoulder, and onto his chest and back. The focal point of the chest portion of the tattoo is a lion’s head, and the whole tribal tattoo is inked in black.

Lion images are one of the most common tribal tattoo designs for men, because they represent strength and power. Although lions are traditionally very symbolic creatures, some men choose lions for their tribal tattoos simply because they are majestic and beautiful, and are considered the king of beasts. 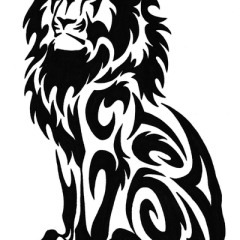