The tribal tattoo in this photo depicts the full body of a fierce-looking lion with his tail curved around his legs.

Although many tribal tattoos include only the face of a lion, this tat portrays a lion’s entire body, inked in black and white. The lion is a popular image to include in tribal tattoos for men, since these magnificant creatures symbolize strength, power, and sometimes even royalty.

Lions are known far and wide as the king of the jungle, which makes them one of the most common animals men choose for their tribal tattoos. This lion tribal tattoo would look great on a man’s leg or arm. After all, what guy wouldn’t want to have a tattoo of the most respected and feared animal in the jungle?? 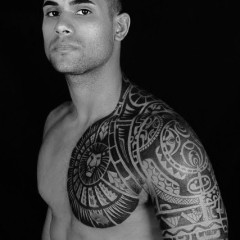