Intense skull tat inked on the arm with large yellow roses and crossbones, one that actually protrudes through the skull.

In a unique twist on a skull crossbones tattoo, this person got a skull tattoo with a bone actually protruding through the skull at the top and bottom. The skull in the arm tattoo is surrounded by large yellow rose blossoms and leaves, and the yellow color is repeated in the skull’s eyes, teeth, and in the string binding the bones together. The skull & rose tattoo is inked on the forearm, extending down to the wrist.

Skull & rose tattoos are a popular type of tattoo design, mostly because of the stark contrast they portray between life and death. The yellow also creates a nice aesthetic contrast with the black and white skull and bones. On its own, a yellow rose tattoo would typically represent devotion, freedom and friendship. Used in combination with a skull tattoo, the wearer could make the skull look less ominous and could give it a new meaning: perhaps freedom from death. 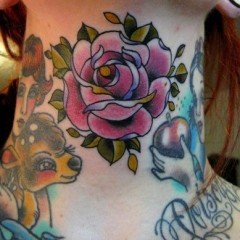 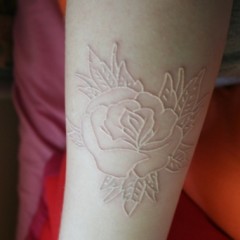 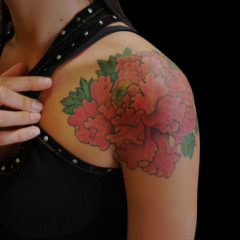