This skull tattoo was designed specifically for the wearer, as it incorporates a pilot’s helmet, which must mean something significant for this man. The skull in the arm tattoo is inked in black and white, but the helmet includes a yellow and red bow, and red is also used in the eye sockets and in the background of the skull tattoo. The skull tat is inked on a man’s arm, near his elbow.

Because skull tattoos are often used to symbolize death, and given the use of the pilot’s helmet in this skull tattoo, it is possible that the arm tat is meant as a tribute to a pilot who passed away. Other meanings could be that the wearer is a pilot or in the Air Force and was looking for a cool way to celebrate his career. The red and yellow colors also probably have some sort of significance for the wearer. 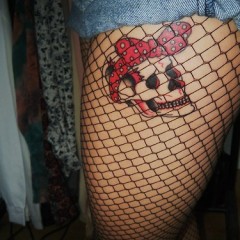 Skull tattoo for girls with bow on thigh 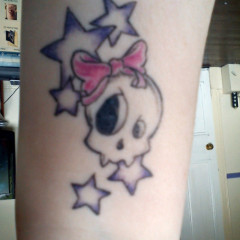