This girl’s intricately-designed bird tattoo features a swallow in flight gliding down her side, carrying a set of old-fashioned skeleton keys in its mouth. The tat is inked on this girl’s side/ribcage area, and the bird is inked in black and red, two of the keys are black and one is yellow and red. There also appears to be a cloud below the swallow and either a sun or moon in the background. Although the meaning of a swallow tattoo can be any number of things, the fact that the bird in this side tattoo is carrying a set of keys obviously represents something very specific to the wearer. One common swallow tattoo meaning is returning home, dating back to a time when sailors viewed swallows as a sign that they were close to land. Because a key is also a common symbol of “home,” this swallow tattoo could mean exactly that. 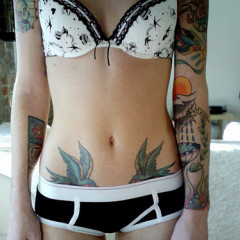 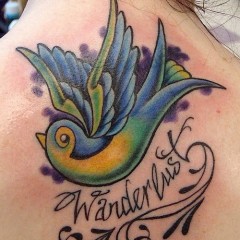 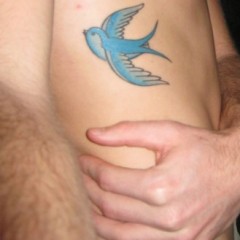