These guys must be best friends because, even though their full sleeve tattoos incorporate different designs, the overall look of the arm tattoos are pretty similar. The guy on the left sports a vicious teeth-baring jaguar of sorts with multiple sets of eyes on his upper forearm, accompanied by a longhorn cattle skull, and a large and colorful Native American chief portrait. The guy in the middle used a lot of black in his sleeve tattoo art, which includes some mystical and spiritual images and crossed-out words that say “This world is doomed.” The guy on the right also has a full sleeve tattoo, which features the portrait of a woman with a howling wolf head on top of her head. The full sleeve tattoo also includes a large snake and a flower. All three of the sleeve tattoo patterns for men evoke a feeling of strength or power. 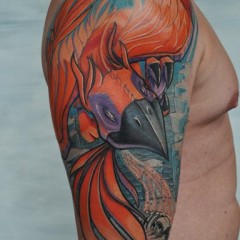 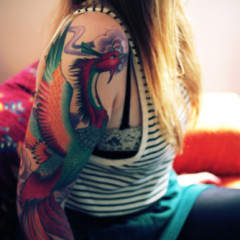