Beta fish are beautiful creatures and they make for pretty and colorful fish tattoos. This girl got a large beta fish tattoo inked on the outside of her right thigh, and the fish extends from near her hip almost to her knee. The beta fish tattoo features a large fish with its body inked in blue and its fins inked in red for some great contrast. Because of their bright, beautiful colors, the wild ancestors of the beta fish, which are native to the rice paddies of Thailand, Vietnam, Malaysia and Cambodia, have been nicknamed “The Jewel of the Orient.” Beta fish aren’t just pretty faces though; they are also known as Siamese fighting fish, and are bred specifically for fighting. Because of this, the meaning of a beta fish tattoo is often meant to represent strength or power. 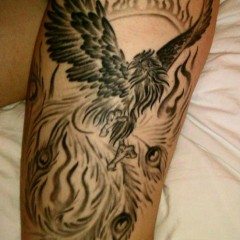 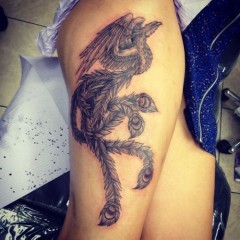