Betta fish aren’t commonly found in tattoo designs, but the colorful fish do make for pretty images in tattoos. This person has a beta fish tattoo inked on their body, and the fish itself is inked in bright blue, red and green. Above the beta fish, there is a gold banner that reads “Serenity” in capital letters. The interesting thing about this fish tattoo design is that beta fish tattoos don’t typically have anything to do with serenity or peace. In fact, beta fish, also known as siamese fighting fish, are best known for their strength and aggression. Some people even use betta fish in gambling, pitting two male fish against one another in a fight and betting on which one will win. Perhaps the meaning of this colorful fish tattoo is meant to be ironic. 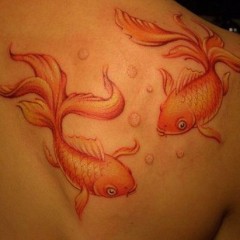 Traditional goldfish tattoo on girls back 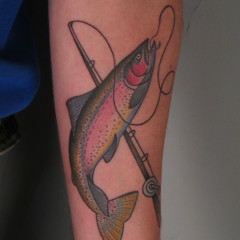 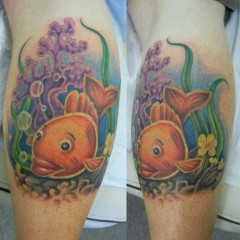