Beta fish tattoos are popular tattoo designs for men because beta fish, also commonly called Siamese fighting fish, are best known for their aggression and power. In fact, some people pit betta fish against one another and place bets on the winner, a practice that almost always ends in one of the fish being killed. This guy’s Siamese fighting fish tattoo is inked on his back, with the fish’s tail extending onto his right shoulder blade and shoulder. The beta fish tattoo is quite large and the tattoo design incorporates some great detail. Beta fish tattoos are traditionally very colorful, but this guy’s back and shoulder tattoo is inked primarily in black and white.

Girls huge tribal phoenix tattoo on her back 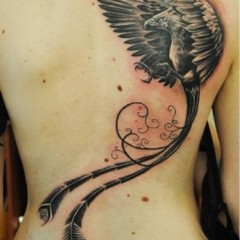