Large sugar skull tat inked on the arm in the traditional Mexican Day of the Dead tattoo design. In this Mexican skull tat, the skull is inked in gray with a purple flower around the one eye and a blue swirl design on the forehead. The skull’s eyes are closed, and the skull is surrounded by green leaves and large roses inked in red with blue fringe. This skull & rose tattoo is inked on the inside of the forearm.

Sugar skulls are images traditionally used in the Mexican holiday called the Dia de los Muertos (Day of the Dead), a celebration of the lives of those people that have died. Although sugar skulls were originally represented in masks and banners used in the celebration, many people have embraced the meaning of the holiday by having sugar skull tattoos inked on their bodies. 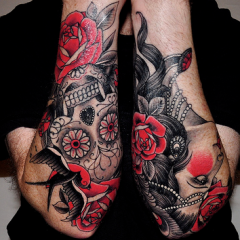 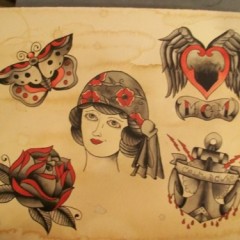