Old school anchor tattoos like this girl’s ink are cool because they typically have a neat design. This colorful, girly anchor tattoo is inked primarily in red, yellow and blue, and the design has enough going on to make it interesting, but not so much that it looks busy. In the center of the tattoo is an anchor, with two ropes tied to the ring at the top that curve around to form a heart. Around the outside of the heart are yellow flowers, and there is text above and below the heart that reads “Into the sea, you & me” Behind the anchor in the center of the tattoo is an old school captain’s wheel like aboard a ship. In most cases, feminine anchor tattoos have a deeper meaning, such as staying strong, a safe port or returning home, but it’s possible that this girl just loves being at sea. 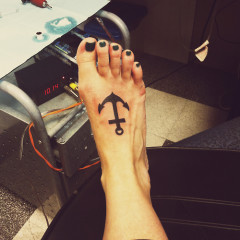 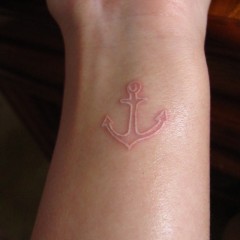 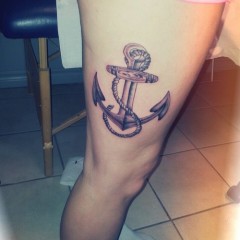